The ImageBox control has had quite a big update, you can download the source from the link below, or from our GitHub page.

Listed below are the changes made during this update, we hope you enjoy them! 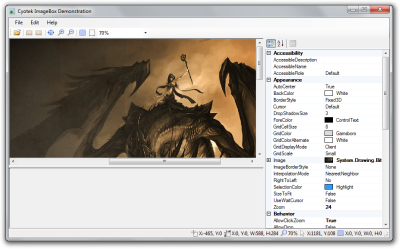 ← Previous: Zooming to fit a region in a ScrollableControl
Next: Extracting email addresses from Outlook →

However, I have a question about the zoomIn & zoomOut method. Everytime I call those methods, it always start from the left upper point instead of zooming from the current viewport. Is there any solution to this?

Shouldn't be too hard to change the code for this, I'll look at that for the next update.

Thanks for the feedback - I'll look into this and get it updated as required!

It is a great project. I wanna to develop this to perform map function. I have list of node position (Long,Lat) or (X,Y) relative to image. When map zoomed, that position change depend on calculation on zoom var. Something like when we put balloon position in google map and when I poiting to it, it show information of this position.Thanks

The ImageBox control has a number of GetScaled* and GetOffset* methods that can be used to convert 1:1 points and rectangles to match the current zoom level or scroll position - you should find these make it pretty simple to add those sorts of overlays to the control.

Thanks for your comment. I don't remember changing anything explicitly about this, the code used to the draw the image is probably unchanged since it was implemented. What is possible though is I changed the default InterpolationMode to be more appropriate (it's currently set to NearestNeigbour, which is the fastest at the expense of being blocky). You could try changing this to HighQualityBicubic and see if that helps. If this doesn't help and it's something else, perhaps drop me an email or forum post with screenshots or samples demonstrating the issue?

This is very nice but I would like to have it never show scrollbars, while maintaining the zoom/pan abilities via drag & scroll wheel. I was able to hide them but in doing so it broke the image display. What would be the correct way to accomplish that here?

I took a quick look, but all the approaches I tried did have the effect of breaking it. I didn't spend a huge amount of time looking at it, but all the approaches I tried (using ShowScrollbar, removing the WS_HSCROLL and WS_VSCROLL styles etc serve to break it. I did some other tests and the SCROLLINFO data for the control does still seem to be correct, so it's mostly likely something to do with the way the ImageBox is processing the information - in other words it should be resolvable with time.

Thank you Mr. Richard for your blog and updates to the code (ImageBox and TabList update's - virtual mode, pixel grid and so on).

Richard, why don't you support CMYK?

Richard, why don't you support CMYK? Also in PhotoshopLoadPalettes Easy approach (approximation, without using ICC profiles) is in ReadSwatches()

Thanks for the comment, although I think you posted it to the wrong article. I did actually add CMYK support quite some time ago (March 2016 according to the commit logs!), but I haven't gotten around to republishing any source as I essentially rewrote it to avoid some of the precision issues I was finding. I have added a note to try and get around to this sooner rather than later.

Thanks again for the comment and also the sample conversion code!