Over the past few weeks I've been messing around creating a unique graphics for our Jewel Rush game. One of the things I was experimenting with was explosion animations. Although tools exist for generating explosions the problem with most of these is that they create large sprites which don't shrink well, and the output is a bit more realistic than what I was looking for.

And while I'm competent enough to do application graphics (more or less!), gaming graphics are a completely different kettle of fish!

Above is a screenshot from Missile Command, a classic from Atari. That's the sort of explosions I wanted to create, so I wrote a small tool that would create these sort of graphics in a random (but reproducible) fashion and export them to images for use in other tools such as Spriter. As it turned out, the graphics it produces didn't end up quite that way (I was having problems with the intersection stuff) but it's usable enough for the purposes I want. 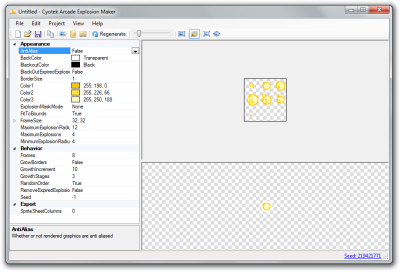 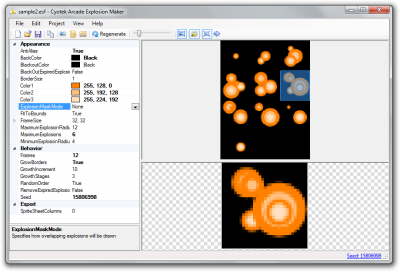 The application was thrown together over the weekend so it's probably not hugely robust and may contain a small army of bugs. But it works and is possibly an interesting starting point for other projects. There's some interesting bits of code here and there, although I'm not writing about the implementation of the code.

Everything can be improved, one of the ideas I'd had for this tool was greater control over blooms, allowing you configure their locations etc with better precision but it wasn't necessary for the graphic I was creating. As mentioned above, the masking doesn't work as expected, it would have been nice if it did. Some better rendering would be a plus too, at the moment the "explosions" are simple rings of color. Some noise or other minor particle effects to make them a little less uniform would probably look interesting.

Source code, and optionally pre-compiled binaries, are available from the link below. The code has been compiled against the .NET 3.5 Client Profile. Due to some minor use of Linq and auto generated properties a small amount of work would be needed to compile against .NET 2.0. I'm afraid comments are somewhat lacking as well, I wasn't planning on releasing this publicly originally.

If anyone creates any interesting graphics or improves upon the code, we'd love to hear from you.

← Previous: Creating an image viewer in C# Part 5: Selecting part of an image
Next: Displaying the contents of a PDF file in an ASP.NET application using GhostScript →