Although officially the Canon CanoScan LiDE 100 scanner is not supported on Windows 10, I have found that it is fully functional. This article describes the versions of Windows I have tested the scanner with along with any observations.

Even though no drivers are available to download, I recently plugged one of these scanners into my Windows 10 x64 desktop (version 1809). To my surprise, Windows Update kicked in and download a set of drivers and then the scanner was partially operational.

What do I mean by partial? I was able to scan using the Windows Image Acquisition framework (WIA) from several applications. However, none of the buttons on the front of the scanner are operational - when viewing the properties of the device the properties page states that no applications are registered that can use the buttons. For me, this isn't a problem as I generally only scan pictures and so far haven't needed any OCR facilities.

I'm posting this as I wasn't actually expecting the scanner to work. This is the second flatbed scanner I've bought over the long years, the first one was in the Windows 9x era (also a Canon) and, if memory serves, the scanner simply didn't work with Windows NT and so once I'd moved onto Windows 2000 it was an unusable brick.

I bought this scanner second hand from eBay and based on Canon's website and my personal experience of that previous scanner, I assumed that it wouldn't work with my Windows 10 machines. While waiting for it to be delivered I dug out an old and frankly not very good netbook and stuck Windows 7 on it. While the scanner worked absolutely fine with this, I decided that I wanted to write a quick tool for performing chain scanning with as few user actions as possible. Given that trying to do real work with that netbook is not feasible, I plugged the scanner into my desktop in the slim hope it would work so I could develop my tool. Happily for me, it did!

As long as I have this scanner and Windows 10 I'll test it again with each new Windows 10 upgrade and will update this post if the compatibility status changes. 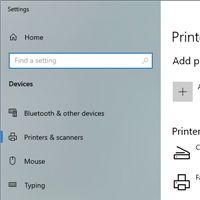 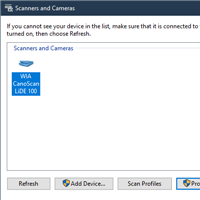 The Scanners and Cameras dialog listing the LiDE 100 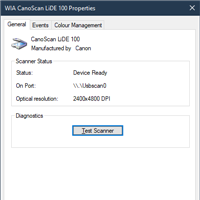 So, does the Cano Scan Lide 100 work with Windows 10? I have to upgrade to Windows 10 and I am worried my scanner will no longer work. I am currently using Windows 7.

Yes, the scanner works with Windows 10 (at least on the two versions that I have personally tested with (64bit versions of 1809 and 1903 (there was an error in the blog article which originally said 1703)), with the caveat that the hardware buttons on the scanner do not seem to work. Over the last two months I've scanned just a touch under 2000 items using Windows 10 on a Surface Pro 2. Any application that uses the WIA method (which I believe is most applications these days) should work absolutely fine, I'm not so sure about older applications that only support TWAIN.

I've only used the scanner for scanning images of things, I haven't tested with OCR as I haven't had a need.

I don't run insider builds so I haven't tested 1909 yet, but I'll update this post when it is generally available and I've updated one of my devices to use it.

perhaps you could tell me the best driver for my laptop? and where I could get it? what site?

Richard, thank you in advance for any information about that problem best regards

Thanks for the question. In my case the answer is simple - I didn't manually install a driver. I just plugged the scanner in and Windows itself took care of installing an appropriate driver via Windows update. So my suggestion would be to plug the scanner into your laptop via USB and give it a few minutes for the driver to automatically install, at which point you should be good to go.

Alternatively, you could download the 64bit Windows 8.1/8/7/Vista driver package from Canon https://www.canon.co.uk/support/consumer_products/products/scanners/lide_series/canoscan_lide_100.html?type=drivers&language=en&os=windows%208.1%20(64-bit) and install that directly but given that Windows correctly installed a driver on two different computer systems I've tested I suspect it would automatically work you too in your laptop.

As an addition, I am currently running Windows 10 version 1909 and it is no problem to get the Canoscan Lide 100 to work as ever in Windows 7. When plugging in the scanner Windows 10 automatically installs a perfectly working driver. On the software page of Canon just ignore the statement that Windows 10 is not supported (which might be true, but nevertheless it is working fine) and choose Windows 8.1 64-bit in the OS dropdown selection list. Then download MP Navigator EX and install. It installs properly and it works no different than it did using Windows 7. Even the buttons on the front of the scanner are working as intended.

Maybe Canon would like to sell us new scanners but this simple one suits my needs more than sufficient. I am glad to continue using it on Windows 10.

Thank you for taking the time to comment! I don't usually bother installing extra software, but as Canon doesn't have as much bloat as HP I gave it a test and can confirm that MP Navigator EX works perfectly fine on Windows 10 version 1909. I'll update the article accordingly when I've done some more testing.

Once again, many thanks for taking the time to comment.