Back at the start of the new millennium, I had a publishing agreement with another company to publish our components under their branding. The first of these components was the ColorPicker ActiveX control. Roll on 13 years later and that publishing agreement is long expired, ActiveX is dead, and yet here I am again writing a color picker control. Except this time losing money rather than making it. There's probably a life lesson buried in there somewhere.

All of our current products ask for a color at least once (mostly buried in an options dialog), and some of the prototype products we are working on ask for more. Currently, we just wrap around the System.Drawing.Design.ColorEditor class, which overtime has identified a few problems:

The other option briefly considered was just to replace with the standard color common dialog. But this dialog looks and operates the same as it did back in Windows 3, and while that is pretty good from a consistent UI standpoint, it does mean it hasn't kept up with changing times - such as entering colors as hex values. I took a look at some other third party libraries but none of them were flexible enough for what I wanted.

In the end I went with writing my own set of C# based color picker controls which we're providing here as open source - we hope you find them useful. As there's quite a lot of code, I'm not going to describe them line by line as I've done in the past, but just provide an overview of each component. 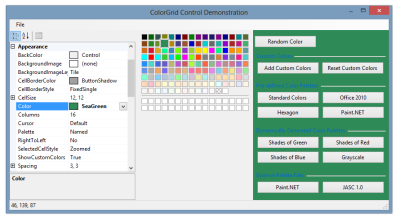 This control displays a grid of colors, and supports both a primary palette, and a custom color palete. Several properties are available for configuring the appearing of the control, and there are behaviour options too, such as built in editing of colors. 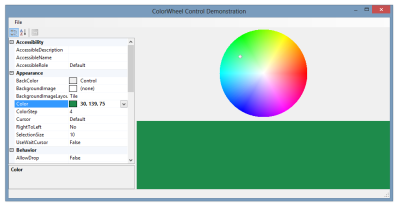 This control displays a radial wheel of colors and allows selection from any point in the wheel. Not much in the way of customisation for this control!

A bunch of controls (inheriting from a single base) that allow selection of values via a colourful bar. Similar to the TrackBar control you have a few options for specifying the drag handle's position and bar orientation.

This control allows you enter/select a color using RGB/HSL or hex formats.

This control allows the user to pick a color from any pixel displayed on the screen. 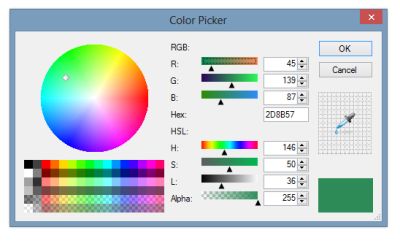 This form puts together the previous controls in a ready to use dialog.

This is a non-GUI component that you can drop onto a form, and bind to other controls in this library. When the Color property of one control changes, it is reflected in the others without having to lift a finger. Useful if you're creating composite displays from multiple controls.

The ColorGrid control has Colors and CustomColors properties which return a ColorCollection. These two properties make it easier as a developer to keep separate a primary palette whilst having the flexibility of custom colors, although it does complicate the control's internal logic a bit! The grid will automatically populate custom colors if you try and set the control's Color to a value not currently defined.

As well as manually populating ColorCollection instances, you can also load in external palette files. Paint.NET and the age old JASC 1.0 formats are currently supported.

All GUI components, with the exception of the ScreenColorPicker include full keyboard/focus support. Many controls support SmallChange and LargeChange properties which influence how navigation keys are processed. Although in the case of the ColorWheel it's not really a bonus... but that's what the ColorEditor control is best suited for!

Download the source code from the link below, or from the GitHub page.

← Previous: Dividing up a rectangle based on pairs of points using C#
Next: ColorPicker Controls Update 1.0.2.0 →

Hello this looks amazing! We really need a color picker which can do alpha values. We were trying to hack the default windows colordialog to do it with some success. This looks great though. I'm going give it a try.

Glad you like the look of it. The ColorEditor control explicitly allows the selection of alpha values combined with RGB, HSL or hex so I hope you find this useful for your needs! Let me know if you run into any difficulties, and don't forget the latest source can be found at the GitHub page: https://github.com/cyotek/Cyotek.Windows.Forms.ColorPicker

How can I use that in my Windows Form?

If you mean adding it to the Visual Studio Toolbox, if you're using the source code, the items will appear automatically. If you've placed compiled dll's in single location and reference them from there then you could use Tools | Choose Toolbox Items in order to display the controls.

If I'm using a third party component, I tend to drop a button onto a form, then go into the designer file and change the type of the button to be the true control rather than polluting my toolbox.

How can I compile this as a dll?

Unfortunately I can't condense a beginners guide to C# and Visual Studio into a comment, it's a pretty wide ranging subject! But basically, if you have a solution open, open the Build menu and choose Rebuild to do everything, or context click a project in the Solution Explorer and choose Build to build individual projects. This will then compile your project into the various DLL/EXE files depending on the types of project - generally these will be in a folder called either "debug" or "release" depending on the project configuration.

Have you tried looking at the Getting Started with Visual Studio documentation on MSDN?

NEver mind, have already solved it! Thank you very much