For projects where I need some form of syntax highlighting, I tend to use the open source DigitalRune Text Editor Control which is a modified version of the text editor used in SharpDevelop. While it has a number of syntax definitions built in, the one it didn't have was for CSS formatting.

After doing a quick search on the internet and finding pretty much nothing, I created my own. This article describes that process, along with how to embed the definition directly in a custom version of the control, or loading it into the vendor supplied control. 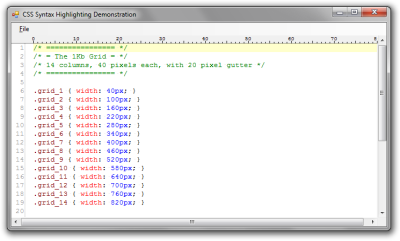 Each definition is an XML document which contains various sections describing how to syntax highlight a document. An XSD schema is available, named Mode.xsd and located in the /Resources directory in the control's source code.

Here's an example of an (almost) empty definition - I've filled in the definition name and the list of file extensions it will support:

The RuleSets element contains one of more RuleSet elements which in turn describe formatting. I'm not sure how the control decides to process these, but in my example I started with an unnamed ruleset which references a named ruleset, and in turn that references another - seems to work fine.

There are two key constructs we'll be using for highlighting - first is span highlighting, where an block of text which starts and ends with given symbols is highlighted. The second is keywords, where distinct words are highlighted. From having a quick look through the source code to figure out problems, there appears to be one or two other constructs available, but I'll ignore these for now.

First, I need to add a rule for comments, which should be quite straight forward - look for a /* and end with /*:

The Span tag creates a span highlighting construct. The Begin and End tags describe the phrase that marks the beginning and end of the text to match. The stopateol attribute determines if the line breaks should stop at the end of a line. The formatting properties should be evident!

Next, I added another span rule to process the highlighting of the actual CSS rules - so anything between { and }.

Note this time the rule attribute - this is pointing to a new ruleset (more on that below). Without this attribute, I found that I was unable to style keywords and values inside the CSS rule, as the span above always took precedence. The new ruleset looks similar to this, although in this example I have stripped out most of the CSS property names. (The list of which came from w3schools)

First is a new span to highlight attribute values (found between the : and ; characters in blue, and then 3 sets of a new construct - KeyWords. This basically matches a given word and formats it appropriately. In this example, I have split each of the 3 major CSS versions into separate sections, on the off chance you want to reconfigure the file to only support a subset, for example CSS1 and CSS2. Also note that I haven't included any vendor prefixes.

One thing to note, in the Value span above, the begin and end tags have color attributes. This overrides the overall span color (blue) and colors those individual colors with the override (black). Again, from checking the scheme it looks like this can be done for most elements, and supports the color, bold and italic attributes, plus a bgcolor attribute that I haven't used yet.

The span in the above ruleset references a final ruleset, as follows:

This ruleset has 3 spans, and one keyword. I had to duplicate the comment span from the first ruleset, I couldn't comment highlighting to work inside { } blocks otherwise - probably some subtlety of the definition format that I'm missing. This is followed by two spans which highlight strings (depending on whether single or double quoted). Finally, we have a keyword rule for formatting !important. (Of course, ideally you wouldn't be using this keyword at all, but you never know!)

Put togehter, this definition nicely highlights CSS. Except for one thing - everything outside a comment or style block is black. And I want it to be something else! Initially I tried just setting the ForeColor property of the control itself, but this was blatantly ignored when it drew itself. Fortunately a scan of the schema gave the answer - you can add an Environment tag and set up a large bunch of colors. Or one, in this case.

Now save the file somewhere with the .xshd extension - in keeping with the convention of the existing definitions, I named it CSS-Mode.xshd.

This is where I was a little bit stumped - as I didn't have a clue how to get the definition in. Fortunately, DigitalRune's technical support were able to help.

Compiling the definition into the assembly

This is quite straight forward, and easily recommended if you have a custom version.

With that done, your definition is now available for use!

You don't need to compile the definitions into the control assembly, but can load them externally. To do this, you need to have the definition file and the syntax mode file available for loading.

Setting up the Text Editor Control

To instruct instances of the Text Editor control to use CSS syntax highlighting, add the following line of code to your application (replacing CSS with the name of your definition if you called it something different):

Rather frustratingly, the control doesn't raise an error if a definition file is invalid, it just silently ignores it and uses a default highlighting scheme. Use the source code for the control so you can catch the exceptions being raised by the HighlightingDefinitionParser class in order to determine any problems. Remember the definition you create is implicitly linked to the schema and so must conform to it.

As the DigitalRune control is derived from the original SharpDevelop editing component, I believe this article and sample code will work in exactly the same way for the SharpDevelop control. However, I don't have this installed and so this remains untested - let me know if it works for you!

The download available below includes the CSS definition file and a sample application which will load in the definition files. Note that no binaries are included in the archive, you'll need to add a reference to a copy of the DigitalRune Text Editor control installed on your own system.

← Previous: Importing a SourceSafe database into Subversion
Next: Detecting if a given font style exists in C# →