Enabling shell styles for the ListView and TreeView controls in C#

Curiously enough, history repeats itself in a limited way with Visual Studio .NET. If you use the ListView or TreeView controls on Windows Vista or higher, you'll find they are somewhat drawn according to the "classic" Windows style - no gradients on selection highlights, column separators (ListView) or alternate +/- glyphs (TreeView). 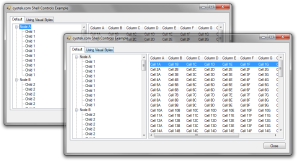 Fortunately however, it is quite simple to enable this with a single call to the SetWindowTheme API when creating the control.

In the sample application (available for download from the link below), we create two new ListView and TreeView classes which inherit from their System.Windows.Forms counterparts.

In each class, override the OnHandleCreated method, and check to see what OS is being run - if you try to call SetWindowTheme on an unsupported OS, you'll get a crash. In this case, I'm checking for Windows Vista or higher.

If the version is fine, call SetWindowTheme with the handle of the control, and the name of the shell style - explorer in this case.

It's as simple as that - now when you run the application, the controls will be drawn using whatever shell styles are in use.

For the TreeView control, I'd also recommend setting the ShowLines property to false as it will look odd otherwise. 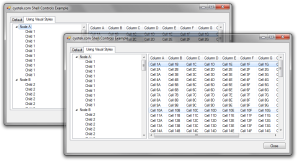 [b]Enabling shell styles for the ListView and TreeView controls in C#[/b] You've been kicked (a good thing) - Trackback from DotNetKicks.com

This is one of the best articles so far I have read online. Just useful information. Very well presented. It helped me lot to complete my task. When I was searching an article on Treeview control over the internet, I found another nice article related to this topic which is also helped me lot. I would like share that article with you, please see at once... http://www.mindstick.com/Articles/022711d0-b15d-4dc0-b50b-e1a9b4cb6a82/?How%20to%20use%20Tree%20View%20Control%20in%20C#