Creating and restoring bacpac files without using a GUI

This isn't always the case. Last year I replaced our woefully inadequate error logging system with something slightly more robust and modern, and this system is hosted on Microsoft's Azure platform using SaaS. No direct file access there!

Rather than using traditional database backups, for Azure hosted databases you need to use Data-tier Applications. While these do serve more advanced purposes than traditional backups, in my scenario I am simply treating them as a means of getting a database from A to B.

SSMS allows you to work with these files, but only via GUI commands - there's no SQL statements equivalent to BACKUP DATABASE or RESTORE DATABASE, which is a royal pain. Although I have my Azure database backed up to blog storage once a week, I want to make my own backups more frequently, and be able to restore these locally for development work and performance profiling. Doing this using SQL Server's GUI tools is not conductive to an easy workflow.

A CLI for working with BACPAC files

Fortunately, as I work with Visual Studio I have the SQL Server Data Tools (SSDT) installed, which includes SqlPackage.exe, a magical tool that will let me import and export BACPAC files locally and remotely.

Less fortunately, it isn't part of the path and so we can't just merrily type sqlpackage into a command window the same way you can type sqlcmd and expect it to work; it won't. And it doesn't seem to have a convenient version-independent way of grabbing it from the registry either. On my machine it is located at C:\Program Files (x86)\Microsoft SQL Server\120\DAC\bin, but this may change based on what version of the tools you have installed.

Creating a BACPAC file from an existing database

To export a database into a BACPAC file, you can run the following command. Note that this works for databases on a local/remote SQL Server instance or Azure SQL Database.

Listed below are the arguments we're using. In my example above, I'm using the short form, you can use either long or short forms to suit your needs.

For trusted connections, you can skip the su and sp arguments. 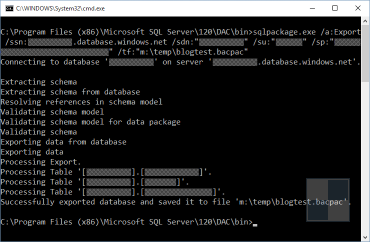 The screenshot above shows typical output.

Restoring a database from a BACPAC file

Restoring a database is just as easy, just use an action of Import instead of export, and invert source and target in arguments.

There are a couple of caveats however - if the target database already exists and contains objects such as tables or views, then the import will fail. The database must either not exist, or be completely empty.

Sadly, despite the fact that you have separate source and target arguments, it doesn't appear to be possible to do a direct copy from the source server to the target server. 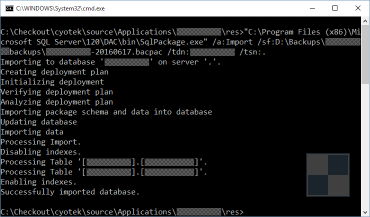 An automated batch script for restoring a database

The following batch file is a simple script I use to restore the newest available bacpac file in a given directory. The script also deletes any existing local database using sqlcmd prior to importing the database via sqlpackage, resolving a problem where non-empty SQL databases can't be restored using the package tool.

It's a very simple script, and not overly robust but it does the job I need it to do. I still tend to use batch files over PowerShell for simple tasks, no complications about loaded modules, slow startup, just swift execution without fuss.