It is common practice to create a class that describes something, a person, a product - some entity or other. Your application may provide a sublime UI for editing these objects, or rely on something more basic such as a PropertyGrid. However, if you use this approach, you may find that some of your properties can't be edited. Yet examples abound of non-simple editing via the grid, such as colours, enumerations and image selection to name a few.

By making use of the TypeConverter and UITypeEditor classes, you can quite easily provide the ability to create richer editing support for your objects. This first article in this series will detail how to use TypeConverter allowing complex objects to be edited as though they were simple strings.

As with most of my articles, I'm starting with a real world example and a solid required. I need to store units of measurement, so for this I have a simple class that has a pair of properties describing a given measurement.

A fairly standard class that simply has two properties along with a default (implicit) constructor. I'm also overriding ToString, as it's useful both for debugging purposes and for having something other than CustomTypeConverter1.Length displayed in the PropertyGrid.

And for the purposes of this demonstration, I have created a sample class which has three length properties.

Isn't that an ugly enum? For this example, it will suffice, but there is another article which describes an alternative approach.

I've set up a sample project which binds an instance of our SampleClass to a PropertyGrid, with the Length1 property pre-set to 32px. When you run this project, you are left with a very unsatisfactory editing experience as you can't edit anything. 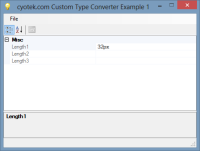 So, what can we do about this?

The TypeConverterAttribute allows you to associate your class with a type that can handle conversion of instances of your type to and from other objects. You can only have one occurrence of this attribute per type. As with a lot of these types of attributes, you can provide the conversion type one of two ways:

Here, we pass in a type object, meaning the type has to be directly referenced by your project and distributed as a dependency.

Another alternative is to use a direct string, as shown above. This string is the fully qualified type name, meaning it could be located in a differently assembly, but one that isn't referenced directly or flagged as a dependency.

Which one you use depends on your needs, but bear in mind no compile time checking can be done of the string version, so if you get the name wrong, you won't find out until you are unable to edit the type!

This class is built into the .NET Framework and will provide a minimum of functionality at minimum cost.

If we change the declaration of our Length class to be the above and run our sample, we get this: 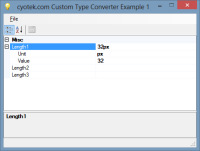 The first property can now be expanded, and each property of the Length class can be individually set. However, there are two immediate problems with this approach:

Again, depending on your requirements, this might be perfectly acceptable. In my case, it isn't, so on with the custom converter!

In order to create a custom converter, you need to have a class which inherits from TypeConverter. At a minimum, you would override the CanConvertFrom and ConvertFrom methods.

Here's a sample converter for our simple Length class:

So, what is this short class doing?

The first override, CanConvertFrom, is called when .NET wants to know if it can convert from a given type. Here, I'm saying "if you are a string, then yes I can convert" (or at least try!), otherwise it falls back and requests if the base converter can do the conversion. In most cases that'll probably be a "no", but it's probably a good idea to leave it in regardless;

Now for the interesting method. ConvertFrom does the type conversion. I'm going to ignore the context parameter for now as I haven't had a need for it. You can use the culture parameter as a guide if you need to do any conversions such as numbers or dates. The key parameter, is value as this contains the raw data to convert.

And that is all you need. Well almost, we need to change our class header:

Now when we run the sample project, we can directly type in a value into the different Length based properties and have them converted to the correct values, including creating new values. 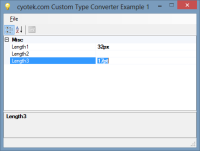 Note that this example doesn't cover clearing a value - for example if you enter an empty string. You could return a new Length object in this case and then change the ToString method to return an empty string. Simply returning null from ConvertFrom doesn't actually work, so at the moment I don't know the best method for accomplishing a value reset.

I haven't demonstrated error handling, firstly as this is a bare bones example, and also due to .NET providing it for you, at least in the case of the property grid. It will automatically handle the failure to convert a value. The disadvantage is the rather unhelpful error message. If you throw an exception yourself, the exception text you provide is displayed in the Details section of the dialog, allowing you to specifying a more succinct message. 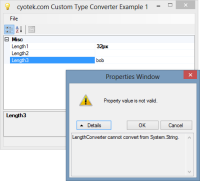 Converting to a different data type

As well as converting a type into our class, we can also use a type converter to convert our class into another type by overriding the ConvertTo method.

In this example, the Length class overrides the ToString method. I would still recommend doing that in additional to this next tip, but as with everything, it depends on your purpose. In this case, we can use the ConvertTo method to convert our Length object into a string.

As with all the methods you override, if you can't explicitly handle the passed values, then ask the base class to attempt to handle it. The above method shows how I check to ensure the value is a Length object, and then if the destinationType is a string, I simply return value.ToString(). Whatever is returned via this method will appear in the PropertyGrid, so use caution if you decide to return formatted strings - you'll need to handle them in ConvertFrom.

There is another, more useful, purpose for this override, but I'll defer that for the next article.

Adding a basic type converter is a very simple thing to do, and is something that can help enrich editing functionality, or even debugging (in lieu of an immediate window or scripting support, Cyotek products have a sample add-in which displays documents in a PropertyGrid for simple editing and querying). Even if you only go as far as adding the ExpandableObjectConverter attribute to a base class, it's more useful than nothing!

You can download the complete example from the link below.

Right to the point, no outwitting, just what I needed. Thanks!