GIF images have both their strong sides and their downsides. Whilst not supporting any form of alpha transparency, they do offer turning one colour entry per frame into a fully transparent pixel.

I've spent the last week fixing some of the bugs that have been reported and a bunch more regressions due to the new libraries, whilst also trying to fix (with scant success) some others that I can't reproduce locally or have any idea how they occurred. Glorious bugs...

In between the fixing, I've also been improving. One of the improvements to be found in the next build is an improved transparency selection tool. 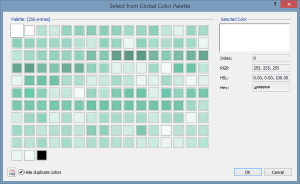 The image above shows the current transparency tool which allows you to select the colour that will be excluded from the rendered image. While there's nothing wrong with the dialog per se, it's not very helpful either.

Lets have another go at making a more useful feature! 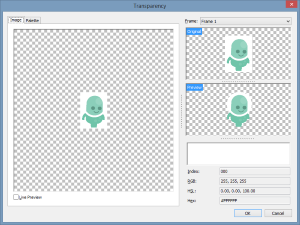 The first obvious difference is that there's now a preview which operates in the same manner as other previews in the software, synchronised panning, zoom etc. So at least now when you select a colour from the palette, you can tell if you've picked the right one!

While the original palette selection is still available (it's now on a secondary tab) the primary focus of the dialog is a clickable image of the selected frame - simply click the area of the image you want to make transparent, and it's as simple as that. If you're setting the transparency of multiple frames at once, you can also choose which frame to use as the preview source.

There's also a "live preview" option - check this box to have the preview automatically update as your cursor moves across the image.

This new tool will be in the next update - to be released as soon as I can squish some more bugs!